American Legion and Peoples State Forests are situated on opposite sides of the Farmington River’s West Branch—a National Wild & Scenic River—in Barkhamsted. A 14-mile network of hiking trails provides opportunities for exploration of the forests’ rugged terrain with rocky cliffs, spectacular waterfalls, old foundations and breathtaking views of the Farmington River Valley. The trails lead past several historic and cultural sites, including old mills, a soapstone quarry, and a former Native American settlement known as the Barkhamsted Lighthouse.

FALPS’ member Alan M. Perrie has provided the Town of Barkhamsted with detailed, GPS maps of all the trails in town, including those in American Legion and Peoples State Forests. Janet Bumstead, a Board member of FALPS and curator of the Peoples State Forest Nature Museum has provided the brief descriptions below. We are very grateful for their descriptions of our trails.

Peoples State Forest is located primarily in the Town of Barkhamsted and has 3,124 acres. The Forest was established in 1924 through the efforts of the Connecticut Forest and Park Association, which coordinated donations from citizen groups and may individuals who purchased land and gave it to the people of Connecticut for about $8 an acre. Attractions include towering white pines in the Matthies Grove and Whittemore Recreation Areas, a 14-mile network of hiking trails, the Barkhamsted Lighthouse Native American historic site, scenic vistas, the historic Squire’s Tavern and the Nature Museum. The forest is managed for saw-timber, firewood production, wildlife habitat and recreation.

At the East River Road trail-head, take the path to the right which passes by the historic Light House Village Graveyard site, and climbs up steep switchbacks. This path leads to the scenic overlooks, including Chaugham’s Lookout.

The trail then passes between the Veeder Boulders, named for Curtis Veeder, an inventor from Hartford who helped raise money for Peoples Forest land purchases. The trail ends at the Big Spring Recreation Area. Distance – 1.3 miles.

Jesse Gerard was a long-time director of the Connecticut Forest and Park Assoc. who enlisted the help of the Daughters of the American Revolution, and Connecticut Federation of Women’s Clubs, to raise money for the Peoples Forest Fund.

The Agnes Bowen Trail is accessible from two trail heads, one on East River Road and the other at the Nature Museum. This moderately hilly trail includes a scenic overlook, passes by the Beaver Brook Marsh, and follows along Beaver Brook on the east side of Greenwoods Road. Distance – 2.5 miles.

This trail also offers access to the Beaver Brook Boardwalk. This boardwalk into the marsh was constructed by FALPS’ volunteers in 2018, is 240-feet long and offers unique access into a 55-acre wetland area. Access to the boardwalk is along the Agnes Bowen Trail off Greenwoods Road, about 500 feet  north of the junction with King Road.

As the secretary of the Barkhamsted Chamber of Commerce, Agnes Bowen was responsible for suggesting that the state locate the Peoples Forest in Barkhamsted. She then personally led a tour of officials on the proposed 2500 acre site that would eventually become the Peoples State Forest. 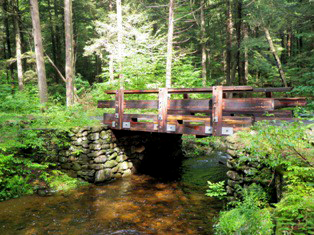 The Charles Pack Trail starts at Greenwoods Road, north of the James Stocking Area. It crosses Beaver Brook and goes past the brick and stone remains of an early 1800s farmhouse. It then crosses the road at the Beaver Brook Recreation Area and continues on to the Big Spring Recreation Area.  Distance – 1.9 miles.

Charles Pack was president of the American Tree Assoc. and the American Nature Assoc. He was an early supporter of public forests and offered technical forestry advice which, among other things, helped save a beech tree grove along the Pack Grove Road. He also made donations to the PSF forestry fund.

The Elliott Bronson Trail starts at Greenwoods Road opposite the Ullmann Youth Camping area and runs through the hilly terrain of the southern portion of the forest. It terminates on Park Road, off of State Highway 181. Distance – 2 miles.

Note: The trailhead for the Elliott Bronson Trail on the Park Road side has been moved about 200 feet closer to Route 181. This is where the new parking lot was created. A small kiosk is up and a short connector trail leads to the north connecting to the original trail.

E.P. Bronson wrote the Forestry Pageant for the dedication of Peoples Forest in 1924. He was also a forest fire warden, a member of the Board of Fisheries and Game, and Superintendent of State Parks until 1964. 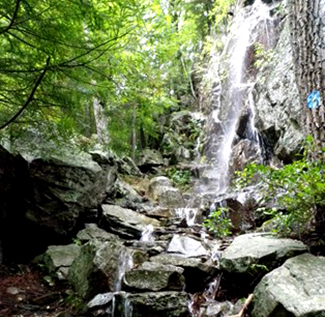 The trail-head is on East River Road and starts at the Jessie Gerard Trail sign. Follow this trail to the left. It is steep and rocky and features stone steps installed by the CCC in the 1930s. This trail is a popular winter ice-climbing site. Distance – .2 miles. 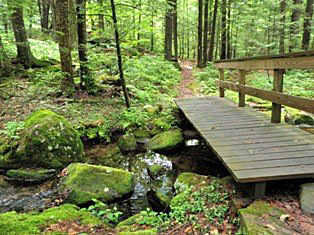 The Robert Ross trail starts at the end of Warner Road, runs westerly to the Jessie Gerard Trail; and then southerly along the west side of the ridge, to the end of King Road; proceeds to the Museum and westerly to East River Road. Distance – 2 miles.

The area between the Nature Museum and the juncture of the Robert Ross and Agnes Bowen Trails is rich with lady slippers in the spring. Late May (around Memorial Day) is the best time to view these beautiful flowers.

Robert Ross was a forester who sponsored the first Forestry Work Camp in the 1930s, which was later used as a model for the C.C.C. He was very influential in the development of Peoples Forest.

This trail starts near the east end of the Elliott Bronson Trail and leads to an area of rock ledges known as the Indian Rock shelter. For 1500 years soapstone was quarried here by Native Americans. Distance – .2 miles.

Walter Landgraf was the curator of the Nature Museum (then called the Stone Museum) from 1992 when it reopened, until his passing in 2007. He is fondly remembered for his wealth of knowledge about the forest, its flora and fauna, and local history.

This short trail, created in the summer of 2012 by a seasonal worker, leads to a corner of the Beaver Brook Pond. Birds and other pond life may be observed from here. To reach this trail, start at the southernmost Charles Pack trailhead on Greenwoods Road, go over the wooden bridge that crosses Beaver Brook, then take an immediate left and follow the green markers. Distance: .1 miles.

American Legion State Forest is comprised of 1,245 acres lying on the West Branch of the Farmington River in Barkhamsted. The initial 213 acres of this Forest was a gift from the American Legion in 1927 to provide citizens an example of proper forest management as observed by U.S. soldiers in Europe during World War I. 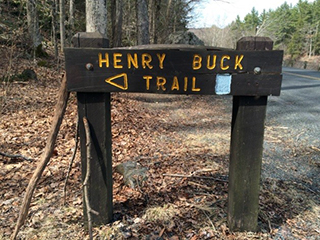 The Henry Buck Trail winds through the Forest for 1.7 miles, passes by an  historic mill site and offers a view of beautiful rock formations as well as the river valley. During the spring this trail is replete with dozens of types of wildflowers.

The Austin Hawes Memorial Campground provided 30 large campsites and 6 cabins near the river.

Start at the southern trailhead on West River Road 2.0 miles north of Route 318. The first 1/2 mile of the trail is relatively easy going on through a lush forest. It is replete with wildflowers from late April until early May. Eventually the trail begins to climb and soon reaches the remnants of a cheese box mill from the early 1800s. Ruins of the power dam for the mill are slightly upstream. After crossing the old dam and across stone ledges there is a bronze plaque high above on the rocks to the left honoring Henry Buck The trail then descends a short hill to The Tremendous Cliffs.

The trail then crosses a narrow ledge that you must climb up through. It is a balancing act to get across the 8-foot ledge. After that, the trail descends steeply, partly beside a stream to West River Road at 1.7 mi. Walk down the road for 0.3 mi. to your car.

Henry Buck was Vice President of the Connecticut Forest & Park Association from 1928-30 and a Yale-educated civil engineer, who directed the construction of CT’s Civilian Conservation Corp (CCC) camp in American Legion State Forest.

This short trail of 0.4 miles from the trailhead begins 1.5-miles up Legion Road (which is gated in the winter months). You can either drive to the trailhead or walk Legion Road, which adds 3 miles to the hike and a 760-foot vertical climb.

The hike to the ledge is 0.4 miles and offers views of Ski Sundown to the right. Peoples State Forest is directly in front of you.

On the way up or back be sure and check out the glacial erratic (boulder) that was split in half by many years of freezing and thawing.